The best gas pressure washer is not something easily found or even defined. Trying to find the right one for you can be a challenge, and not knowing what to look for makes it even more difficult. That being said, there are a number of fantastic models out there that will be able to take care of any number of jobs and make maintaining your home much easier. Here are two top models. 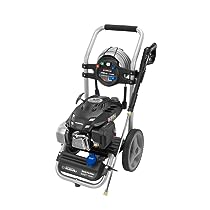 The Powerstroke PS80946A is about as middle of the road as you get when it comes to gas pressure washers. It has a number of benefits and a number of problems and the question becomes less about whether it’s good or bad so much as whether the problems outweigh the benefits or not.

It’s important to start with the first thing that you’re likely to encounter with this unit: the packaging. This is bad. It’s basically placed loose in a box with no padding at all to keep it in good shape. Often there is still oil in it from testing, so when it gets thrown around, the oil can get everywhere. The cardboard is cheap, so it’s not unlikely that your unit will show up damaged, and you’re highly unlikely to get much help from customer service, who seem to have a list of other people to take responsibility.

Once you get it out of the box and hopefully have no damage, or at least only cosmetic damage, you can start putting it together, which is an absolute breeze. No problems getting it ready to go, filling it with oil and gas, and getting it started. In fact, I was impressed how consistently it starts with only one pull, two at the very most.

Just take a look at some of these contradictions you have with this machine: 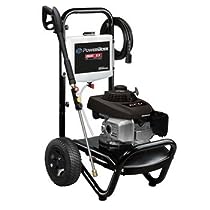 The Power Boss 020453 is one of the best and most versatile machines for power washing that you are likely to find on the market. Of the many features it could have, perhaps the best aspect of it is the control that you get with the pressure, giving you plenty to work with but allowing you to really have a lot of choice when it comes to how much to actually use. That being said, there are a lot of wonderful things about this machine that are worth taking a look at.

To start with, you can’t discuss this washer without first discussing the engine. Like many of the Power Boss branded machines, it comes with a Honda engine that works absolutely perfectly. I was able to start the unit consistently with a single pull. Honda engines also store well, they can handle jostling, and give you plenty of consistent power. It’s also remarkably quiet for a gas powered washer, something that isn’t necessary, but it’s a nice bonus to actually cleaning well.

Speaking of cleaning well, this thing is great at getting really deep into hard surfaces like concrete or stucco. Even stains that I had had for years were at least worn down significantly. I can’t say they disappeared entirely, but it’s a power washer, not a magic wand. I would be hard pressed to notice at least one oil stain if I didn’t know where it used to be. As far as cleaning a deck or lawn furniture, it should have no problems whatsoever.

I would have preferred if the cleaning tank had a listing of how much cleaning solution to anything else goes in it, but I was able to figure it out. The cleaning tank is actually one of my favorite parts, since you can use it to create an excellent foam for things like car washing. Because you have so much control over the stream, it’s possible to use this actually to wash your car entirely, though I would be careful that you don’t give it too much power if that’s what you plan to do.

About the biggest problem is that, depending on where you order from, you often get unsold units that were passed off to another retailer and were tested. While this sounds like a good thing, it means that they put oil in the unit that they are unable to drain before shipping, so you may end up with a machine covered in oil by the time the box arrives. It’s highly recommended that unless you get this from a retail store that you open it in a place that won’t get stained. If there is no oil in it, then it’s easy to put together and get started, with clear instructions and an intuitive design.

What is particularly impressive, however, is the price. This unit is very, very inexpensive for something as powerful and reliable as it is. The engine alone can cost as much as this whole thing in some cases. The price is also shocking since it’s a very dependable machine and, if you store it properly, should have no problem going in and out of frequent use. When you run across a unit that inexpensive, you expect that it will be a throwaway, not something that will be with you for years. This is clearly the latter.

These are just two of the many, many different gas power washers available on the market, but even among them the differences were pronounced, and it’s easy to see how having specific needs might change the model that you buy. The trick is to pay attention to the scope of the work you have to do and buy within those parameters.

It takes a while to learn how to read reviews for power washers, but the more that you do, the more you’ll see what it is that you might need and be able to make a better, more informed decision at the time. That way no matter what it is you want to use it for, you’ll be sure to get the best gas pressure washer.