When you’re looking at electric pressure washer reviews, there are a number of things that you’re going to want to look for. Like with every product, there are certain traits of the product itself that are indicative of the real world applications that can be had with each of the washers. 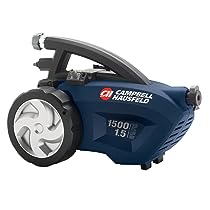 Considering the price, the Campbell Hausfeld PW135002AV is a really fantastic machine. It works incredibly well and the reduced power (it only has 1500 psi) actually works in its favor in a lot of cases. That being said, it’s worth worrying about the long term use of this machine, considering its construction.

At only 1500 psi, it’s easy to dismiss this machine as ‘not powerful enough’ to do any significant jobs, or barely a pressure washer at all. What a lot of people don’t realize is that this is actually an opportunity to use your washer for all sorts of projects that you might not have been able to before. For example, even at as little as three hundred more pounds per square inch, you’re looking at enough pressure to strip paint from decks, cars, or other more fragile places. At this pressure, you can clean without having to worry about causing damage.

If anything, Campbell Hausfeld has made its lack of power on this model a selling point.  They include a car detailing kit with the unit just to stress how gentle this is on delicate surfaces. That being said, it is capable of cleaning concrete, stucco, and more resilient surfaces pretty simply. In some cases it took a little longer than it would with a stronger machine, but ultimately it did work and the increased utility helped a whole lot.

This unit is particularly easy to put together. Once you take it out of the box, every piece goes exactly where you think it does. The design is very intuitive in that fashion, and I liked that the manual basically just confirmed my suspicions. My only complaint on the design is that it’s a little awkward to store since the nozzle doesn’t collapse and the hose doesn’t coil. You instead have this pile of power washer in a corner of your garage that you really can’t do anything about.

The biggest concern is construction. This thing is almost entirely plastic. While 1500 psi may not be a whole lot of pressure for a power washer, it is still a lot of stress to put on plastic. Even some of the internal, working parts are plastic, and I can’t imagine that they will last long at all. Already, some people are reporting that the machine just starts springing leaks as the water looks for some outlet and then starts making them.

While this unit does work pretty well for what it does, there’s no indication that it has any staying power. For such a cheap unit, maybe it’s worth it to be a throwaway for a season, or even a small job or two, but don’t invest in this expecting years of loyal service. Instead, expect exactly what you think of when you hear “cheap pressure washer“: something that will do the job fairly well and maybe a few others, then get tossed and replaced with something better. 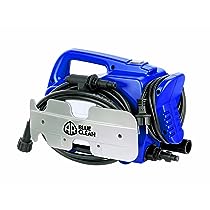 When it comes to electric pressure washers, the AR Blue Clean AR118 is probably one of the best available. It has its problems, but they are relatively minor, especially compared to other models, and the benefits far outweigh them. If it doesn’t become the standard for this type of washer, I will be surprised.

The first thing to discuss is pressure, and this has plenty of it. At 1500 psi, you can do some pretty heavy cleaning and it can easily strip paint if you aren’t careful. But where this unit really excels isn’t in pressure application, but rather in pressure control.

The application of various nozzles and adjustments on the wand make this a really versatile machine, capable of giving everything from a fine mist to a cutting stream of water. Literally cutting, in fact, as I accidentally sliced a part of a cardboard box with the stream alone. I don’t think it would penetrate human skin, but it would hurt. Despite that, though, I had no problems using it on my lawn furniture, my car, and my fence without any worry that I would accidentally damage any of them.

Of the issues, perhaps the first one you’re likely to encounter is that the manual is incorrect for setup. It comes with a clear plastic hose adapter that is supposed to, according to the manual, screw into the hose which allows you to screw it into the machine. The problem is that the manual has it backward, and you can spend quite a bit of time trying to figure out why this adapter doesn’t seem to fit any hoses.

As far as the hose itself goes, the unit actually does have a bit of a leaking problem. It’s not significant, but when you’re holding it, you won’t be able to help but notice that the hose just doesn’t have a very good seal.  And this may make for a wetter operator (you!). Granted, you should expect that anyway, and there is no measurable drop in pressure.  And it shouldn’t be an issue, especially when combined with the hose adapter problem.

The design is generally pretty good and easy to use. I like that it’s all metal parts inside, and the plastic casing is to hold them, not to hold the water that will be under pressure inside. The handle is highly convenient and makes moving around with this very easy. I wish they had thought of the fact that the place to wrap the chord can only hold about a third of it, but there are ways to deal with that.

Really, for the price, they don’t get much better than the AR118. It works well, it is adjustable to your needs, and despite the hose problems, it still provides plenty of pressure.

Both of these reviews focused on different aspects of the washer, but where they didn’t focus, the assumption can be made that they worked well enough. Reading electric pressure washer reviews is a process of searching for the things that are important to you and seeing if there is a cause for concern or not.

With practice you’ll learn to see both what is said and what it not said, then determine what each of those things mean in the greater context of usability, durability, and longevity. Learning how to read reviews makes it much more likely that you’ll end up with the pressure washer that will best serve your needs.