The best electric power washer is a highly subjective thing, a determination based primarily on your needs and desires more than anything else. Usually getting an electric power washer is for regular home maintenance. But not every home is the same, so it’s important to find the one that will be best for you. Before even looking at reviews, make a list of things that you think you will need to do with your machine so that you have an idea of what might be important. Once you’ve made your list, start looking at other people’s opinions with those things in mind, such as these highly rated machines. 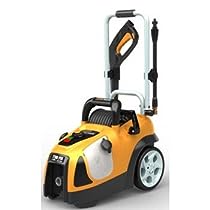 Powerworks is one of the most solid power washer manufacturers around, and the 51102 model is a testament to that. While it absolutely has its flaws, its successes are well worth a few little things that make it less than perfect, many of which are only potential problems.

First, let’s say right off that the design of this washer is not only unique, but also incredibly useful. Many of the taller models tip over very easily, but Powerworks made this one with a low center of gravity so that it can be moved easily, but it will stay upright even when you’re jerking the hose around. The parts are also all easy to get to. The main thing I didn’t like was that the detergent tank was a little small and hard to fill due to a tiny opening. That being said, a funnel makes this easier to deal with.

As part of the design that deserves its own mention, the fittings are metal throughout the unit. Plastic fittings tend to break fairly easily, either due to weather, falling over or that they simply can’t handle the pressurized water. So knowing that Powerworks spent the extra money on quality fittings made me more comfortable as a consumer.  It means you will be able to this machine for years.

The pump on this one is also excellent. While I can feel that this is less than 2000 psi, it still maintains consistent pressure for a 1700 psi model. The pump has no problems when it comes to turning on and off, and it runs very quietly, which makes the power washing job much more pleasant.

There are some problems. The handle bar is a little flimsy on this unit. Considering how low to the ground it keeps its weight, you would expect that the handle would be sturdier. But I can’t help but feel that this one will bend or break pretty easily. At the very least, it should be attached to the unit better. Mine at least tends to shake and feels a little loose.

The handle and hose seem like they could be made of better materials as well. It’s a shame to see Powerworks, who spent so much on the other materials and parts, skimp on the pieces that a person is most likely to encounter and be aware of. Then again, they’re also the easiest to replace should something go wrong.

Their customer service is excellent, so maybe they were banking on most units working well and being able to offer simple solutions to people who did experience problems? I can’t say for sure, but the flimsy plastic washer handle and easily kinked hose feel out of place on this otherwise excellent machine.

For the most part, this is a great machine. The only other problem is that there’s no easy way to empty the tanks for winterizing besides turning the whole thing upside down, but again that’s a minor quibble compared to the excellent use you’ll get out of it. Beyond that, it’s powerful enough for regular home maintenance, the design is excellent, and it’s highly reliable. This washer is recommended without reservation. 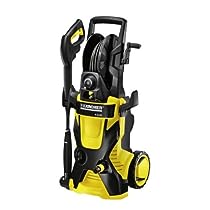 This offering from the Karcher X series is not too bad, but it seems to have a lot of half formed ideas and concepts that simply don’t match up to the reality of what they can actually do. I see where they were going a lot of the time, but they didn’t go far enough.

To start with, the K5.540 is advertized as being “water cooled.” On one hand, this sounds exciting and futuristic. But the more I thought about it, the more I wondered why an electric power washer needs a sophisticated cooling system. Even at 2000 psi, there’s no reason why the engine would need that much in the way of cooling unless they used an engine prone to overheating. It seems like they’re trying to turn a flaw into a selling point.

There are two wands that provide different types of streams. One is fairly standard in that it can produce a variable stream both in terms of power and direction, so you can have a powerful shot of water or a delicate spray. The other is a wand that produces a spiral pattern of water, which can be really useful in loosening dirt as a first pass. I found it remarkably useful and while it took more time, I got better results.

As to the design, it looks like they had a lot of good ideas that they were too cheap to do right. The stand up look seems nice, but it also tips over very easily. The hose reel was actually an excellent idea, but the cord holder is in an awkward place and doesn’t stay put, making me wish they had treated the power chord the same way as that hose. The wand holder is a little flimsy and I wouldn’t trust it for very long.

Perhaps the most damning is that you could both hear and feel the motor oscillating. Eventually I was starting to be able to predict when it would shut itself off because too much power was going through it. I could make the machine work, and I don’t expect a whole lot for the price, but it was incredibly frustrating that the engine has such poor power management.

The Karcher K5.540 is not terrible, but it is difficult to use for what you’re getting. On one hand, it’s about what you would expect for the price, on the other hand there are better machines that exceed their price point available, and it’s probably better that you look for one of those. The K5.540 will get the job done, but it won’t be quick or easy, and you may find yourself adding to the unit just to avoid what Karcher should have kept from being a problem in the first place by making a little extra effort.

Not every review comparison will be so cut and dried, but even from a couple of fairly technical perspectives, you can still tell a lot about how these washers will perform. Many reviews will also cover ease of use or what can be done, but if they aren’t mentioned you can expect they will be standard. The trick is to look for potential problems and see if they could get in the way of meeting your needs. That’s the surest way to find the best electric power washer.